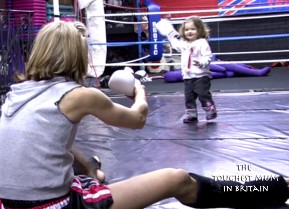 The story of Denise Mellor, female Muai Thai boxer who disputed an intercontinental title 8 weeks after having a baby and, at 35, was one step away from becoming the world’s best female fighter in her category.

The Toughest Mum in Britain is an account of her life-changing decision to leave an office job and venture in a Thai boxing career, coached by England South West Area’s champion – and her husband - Lorne Castle.