It all started 40 years ago with an 8mm camera…

Jorge, my father, thought he was going to study arts; instead he was called to the army. This was in 1967, Portugal was under a dictatorial regime since 1932 and freedom of speech, as well as any contact with the rest of Europe, had been long banned.

Three years later, when he thought he had had enough and his military career was nearing the end, he got sent to the Angolan scrublands to fight a war he didn't believe in – or agree with. He was one of the 800.000 men who fought in Africa between 1961 and 1974. To keep his sanity he set several goals, one of them to return with a film diary of his 27 months in Africa. The 8mm camera started rolling when he departed in 1969, only stopping when he returned in 1971.

After this he didn't see his fellow soldiers again for a long time and the footage remained in a box. Decades later he found the rushes and did a 20-minute montage in his small Moviola. Coincidentally he also reencountered a fellow veteran and showed him the film. All this led Jorge to wonder how the war had affected him, the other veterans, and in fact, the whole country.

At the time I was finishing a Master of Arts in Documentary by Practice at Royal Holloway University of London, so when my father challenged me to make a film about it, I decided to make it my final project and started the research.

I found numerous articles, books and academic papers dedicated to the “silence” surrounding the Portuguese Colonial War. An entire generation of men fought in Africa and, four decades later, most of their families still had little idea of how it was back then, or even more worrying, of how it had been to live with those memories over the years. To find out, we needed to go on the road and ask questions to veterans, academics and specialists who had actually studied the long-term effects of war on people. A year later, the result was CONSCRIPTED.

Numbers are not enough to describe how low this film's budget was...

Email and (free) SKYPE calls facilitated 98% of the communications I had with everyone involved. The production equipment (camera, mikes, tripod, etc.) was loaned by Media Arts (Royal Holloway University of London). Crew? Two people helped me at different stages mainly with sound, and once on my own I relied on the creative use of radio mikes to get the sound while I filmed. 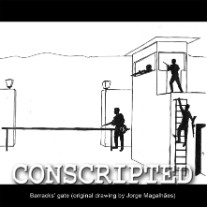 Travelling expenses were the hardest to meet (I live in England, the story was in Portugal...), everything else was kept to a bare minimum, and all who took part in this documentary – and I mean everyone – did it for the sheer wish to see its message delivered to a wider audience.

The production itself was planned and executed against a stringent schedule, as I was not only a one-man-band producer/director/cameraman/editor; I also had to juggle the shoot with the annual leave from my full-time job. So I prepared all I could beforehand, and once in Portugal, whenever I wasn't shooting I was calling, texting or emailing interview and location shoot requests, researching further, and interviewing people on the phone (I remember many days sitting from 8am until midnight straight, with very few toilet breaks!!).

Along came the lonely process of post-production. CONSCRIPTED as my MA's final project was edited in three months, but this was a 20-minute version... my plans were for something bigger. Then there was the animation: 900 drawings, endless hours in front of Photoshop and a lot of actual drawing. This may be normal for professional animators, but I was doing it for the first time!

I waited for the academic feedback on CONSCRIPTED's first cut (I'm happy to say that I got a Distinction), did some further test screenings, jotted down people's comments and went back to the drawing board. Another four months and a few more test screenings later and the final 37 minute version was done. Now it was time to show it to the world and take it a step further: the film festivals' run. 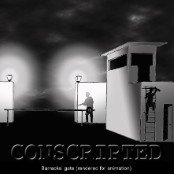